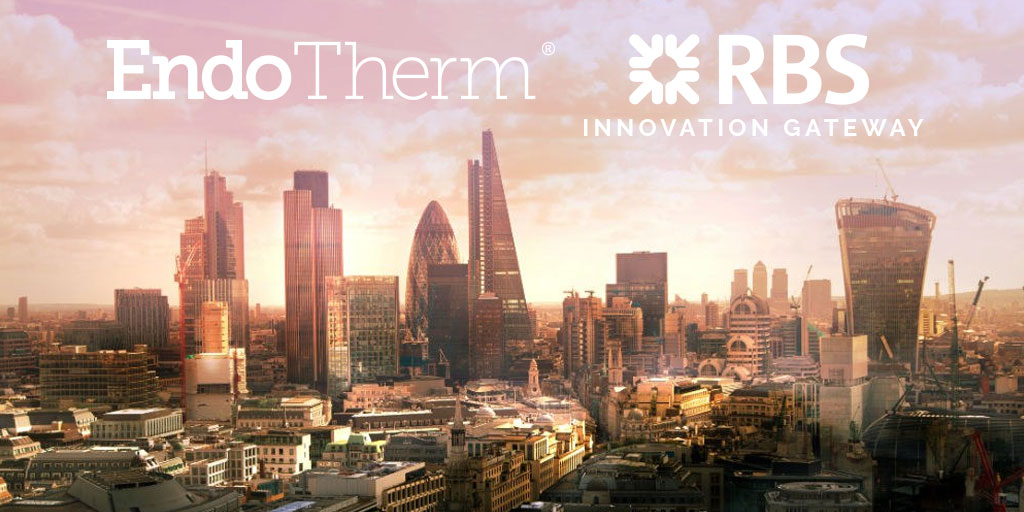 One year on from the introduction of new energy saving innovation EndoTherm to the Royal Bank of Scotland (RBS), Innovation Gateway is proud to announce its matchmaking has helped to significantly reduce RBS’ carbon emissions and energy consumption.

The new innovation, a heating additive that reduces the energy needed to heat and maintain the temperature of a property, was introduced to RBS through the Innovation Gateway programme. It was installed across three RBS branches in May 2016 and piloted for a year to evaluate the success and potential return on investment.

The EndoTherm pilot, which was installed after routine system flushing, revealed that over the three sites, a total of 10,698kg of CO2 was saved, resulting in a 29% reduction in the amount of gas the sites consumed over the year. Based on the pilot, the payback period for the installation has been calculated at less than a year, with the product boasting longevity of seven years.

Following the successful pilot and positive feedback from RBS, EndoTherm has now been picked up by further Partners in the Innovation Gateway, including Heathrow Airport. Other Innovation Gateway Partners include Tesco, Kingfisher, Unite Students, Carillion, Universities of Cambridge and Edinburgh.

“It’s great that RBS have seen such strong savings from EndoTherm. The secret sauce of the Innovation Gateway is the partners’ willingness to share their experience, and their depth of engagement. This is just one example of the Partners benefitting from RBS’ experience and vice versa.”

“It’s a major challenge for small businesses to get in front of large corporations and prove how our products can not only help them achieve savings but also drive business sustainability goals. Without the Innovation Gateway platform, it would have been far more difficult to connect with companies like RBS.”

“EndoTherm is a simple to use but effective product, the team were extremely professional and provided regular updates throughout the trial. Endo Enterprises were always there to support and provide regular updates on the performance of their products, and could not have done enough to ensure we had a successful pilot, we look forward to working with them further in the future.”